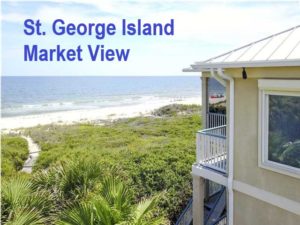 That’s a question every Island Realtor gets asked, nearly every day.  While the question is always the same, the answer almost never is.  Like any market, there are ups and down, influenced by such things as elections, weather, interest rates, and the time of year.

Having just closed a strong second quarter of 2017, it is tempting to answer the question with an abundance of optimism.  There were more homes sold during the second quarter than in either of the past two quarters, and the total volume of sales prices are the highest it has been in years.

Statistics from the local MLS, give us a realistic look at the market.   In addition to the high points noted above, other trends demonstrate that the St. George Island residential market is stable, with a slight upward trend.  And that’s a good thing.

To take a deeper look, the past two and a half years (January 1, 2015 through June 30, 2017) are broken down here in graphs of the various aspects of the St. George Island residential market.

Graph I – A very stable trend line shows quarterly sales over the previous ten quarters.  The lowest point was the first quarter of 2016 with only 19 sales for the quarter, but the quarters preceding and following that low quarter were the two highest with 36 and 32 residential sales.

Graph II – A gently rising trend line shows that the quarterly volume for the second quarter of 2017 was the highest during this time line.  As Graph I shows just 30 sales, combining the two graphs, one may conclude that average selling prices might be rising.  Time will tell.

Graph III – Once again, the trend line and record volume for the second quarter of 2017 indicate a rise in selling prices for St. George Island residences.

Graph V – This graph demonstrates what buyers should know when they wonder how low the seller may go, and what sellers might expect when an offer is received.  Typically, homes on St. George Island sell for somewhere around 95% of the asking price.

Graph VI & Graph VII – Very stable trend lines, showing how many St. George Island residential properties remained on the market for sale at the end of each quarter.  Graph VI shows the numbers, while Graph VII shows “months” of inventory – the number of available properties divided by the number of sales in the previous period.  The current 8.61 months of inventory indicates that this is neither a buyer’s market nor a seller’s market.  Conventional wisdom says when this number goes below six months, we have a Seller’s market and when it is over twelve months, we have a Buyer’s market.